The Schengen Treaty, which was signed the 14th June 1985 on-board the MS Princesse Marie-Astrid on the Luxembourg shores of the Moselle, has come into full effect in 1995. It formalises the agreement of what were initially five EU countries (France, Germany and the Benelux states) to abolish border controls between them. Visas delivered by one of the Schengen member states are valid for the entire territory covered by the treaty (the so-called “Schengen Area”).

The initial treaty from 1985 was signed by the following Secretaries of State:

On the 19th June 1990 a second treaty was signed on the same premises. The so-called “Schengen Implementation Treaty” defines the legal and technical framework for the implementation of the agreement. With the treaty of Amsterdam, which entered into force on 1 May 1999, the Schengen agreements were incorporated into the legal system of the EU.

Meanwhile a total number of 26 countries have joined the treaty by this day, which includes all EU member states (with the exception of Ireland, the United Kingdom, Cyprus, Bulgaria, Romania and Croatia) as well as Iceland, Norway, Switzerland and Liechtenstein. Travel visa issued by a Schengen member state are valid throughout the entire Schengen Area.

Read the complete text of the Schengen convention here: 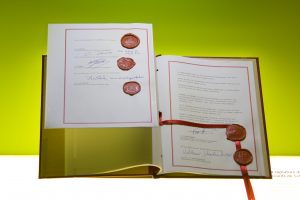